Sa Sartiglia is the most important medieval and spectacular carousel horse in Sardinia, which takes place on the last Sunday and Tuesday of Carnival in Oristano.
It’s considered one of most important carnivals in Italy, but urprisingly it’s not yet well known outside the island.
The word Sartiglia or Sartilla (as we used to say in Oristano) derives from the Castilian Sortija, which in turn originates from the Latin Sorticola, ring, short for sors, luck. In the meaning the sense of the race can be caught: it’s a race to get a ring, a star, but also a feast dependent on the fate.

Each symbol is rich in meaning and refers to the old medieval traditions of this important event, which takes place in 4 major phases. 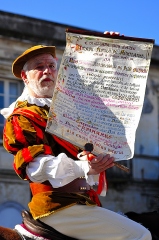 The figure of the Herald on horseback and the reading of the proclamation today are the first acts of the day of Sa Sartiglia.
The Herald, escorted by bearers carrying the insignia of the city and accompanied by drummers and trumpeters, crosses the streets of the historic center, reaches the closest neighborhoods and, focusing in the main crossroads, reads the race announcement, inviting knights and people respectively to join and watch the race.
The Herald publishes the will of the Civic Authority, the starting time of the race and the awards for the winner knights, who will engage in ablility feats using the sword and spear, according to the ancient customs. He also communicates to all knights to follow the orders of “Su Mastru Cumponidori”, the head of the race. 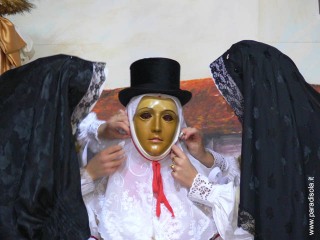 The two ancient corporations of Peasants and Joiners, choose knight will play the role of Su Cumponidori (the head of the race), among many aspirants.
It is subjected to an important sacred rite, because it must be strong, pure and brave. It also needs to become a priest of fertility, whose purity is related to confession and communion on the eve of the Sartiglia.
The chosen knight climbs on a table (sa mesita), a real altar where wheat and flowers abound. From that moment, Su Cumponidori can no longer touch the ground (not podit ponni pei in terra).
Sas Massajeddas, young girls in traditional dress, led by their teacher Sa Massaja Manna, dress the knight according to tradition.
The long rite can be followed only by few people in absolute silence. The main steps are underlined by the trumpets, drums and clapping.
the most important moment is that in which the mask is sewn on the face. From that moment, until the end of the race, the Knight becomes an “half-god” fell among mortals to give them good luck and drive away evil spirits.
Su Cumponidori, dressed in a black cylinder head, the mantilla, a shirt full of puffs and lace, a vest and a leather belt, climbs on the horse, which was brought into the room in silence to avoid angering the beast, get sa pipia de maju and performs Sa Remada, completely lying on the horse, in order to pass under the door and go outside, where immediately begins to bless other knights and people who wait for him. 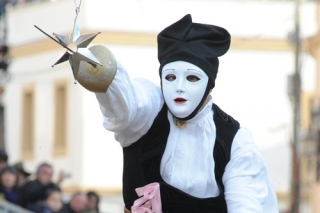 After the Dressing, Su Cumponidori goes toward via Duomo in a parade together with his assistants Su Segundu Cumponi and Su Tertzu Cumponi, preceded by traditional sardinian dress members of the corporation, by drummers and trumpeters. 117 Other masked knights, with horses richly caparisoned, follow Su Cumponidori.
In via Duomo, after having blessed the people who are waiting for him, Cumponidori starts the race, rushing gallop with his sword outstretched in an attempt to pierce the star.
The head of te race then gives his sword to other knights, as a sign of confidence or challenge to their abilities. How many and which riders will have the honor and the burden to run into the track are his personal decisions.
Once satisfied with the number of pierced stars for their corporation and the city, he come back on track to give back swords to the corporation members.
Then he ride the horse at a gallop again and completely lying on it, with sa pipia de maju, bless the people with sweeping gestures: it’s Sa Remada, which closes the tournament and start the parade again in order to move in via Mazzini, along which run the pariglie. 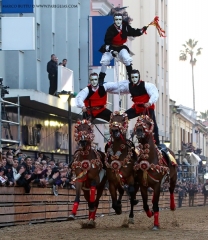 The knights are divided in groups of three, each group is named pariglia.
Each pariglia starting from Su Brocci, the small tunnel leading to via Mazzini, gallop down and perform equestrian acrobatics, until the light conditions allow.
Only pariglia of Cumponidoris can not perform acrobatics to avoid the risk of falling from the horses compromising its sacredness.
It is here that qualities such courage and dexterity are most highlighted and man-horse symbiosis assumes primary importance. Competition from individual passes to be a team play and only those who, in the training during the year, was able to develop particular harmony with their peers and with their horses, will be able to produce big dexterity and ability performances.

We are located in front of Penisola del Sinis, inside the marine protected area...

Our B&B is a typical and very quiet house of Campidano built using "Ladiri"...